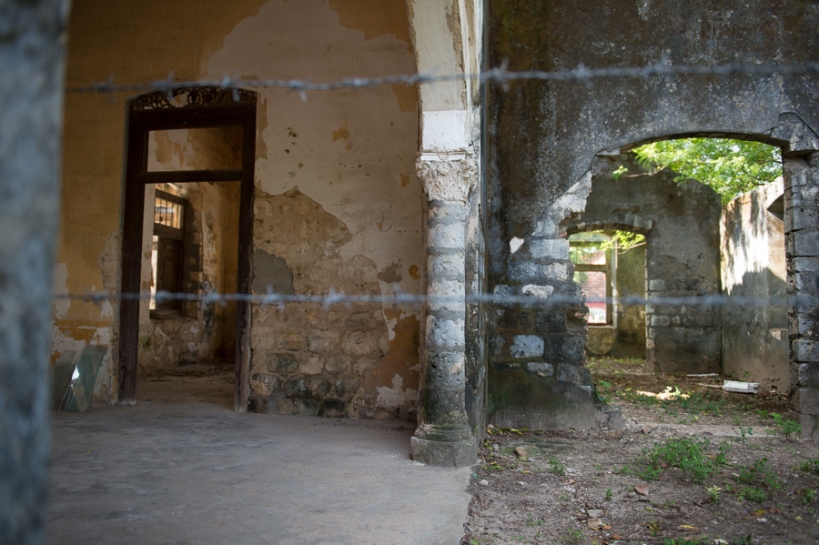 How can I possibly describe this serendipitous sort of day? More than ever, I feel destined day after day to accept what comes and what comes is usually fantastic.

We are now in Jaffna in the northern tip of Sri Lanka. It has just opened to tourism after a 30-year civil war. Dick is particularly interested in driving around and seeing the effects of the Tamil Tiger conflict.

From the little I have gathered (*and I would like to say right here and now… I am not an expert on this war), this was a 30 year conflict between the Tamils (mostly Hindu, who immigrated from India, (one of the southern states in India is called Tamil Nadu) and the Sinhalese (Buddhist and Christian and some Muslim population). The Tamils claim to fame is being the creators of the ‘suicide bomber’. The war was going on until 2009, not so long ago. Reading about the facts of the conflict and why the Tamils were supported by India leads to a similar time in history where another two-state solution happened producing India and Pakistan during the time of Gandhi (watch the movie!). Once again I am reminded that it is all quite complicated. The president now, who for practical purposes, is a dictator, but on the surface seems to have created peace and a lot of business development for a country that for thirty years was under siege. He seems to be like Kagame in that the focus is on the future, the past needs to be forgotten and NGO’s do not seem to be welcome.

So I hold judgment and stay open to all the stories that unfold before my eyes.

We get in the car and quickly find a Dutch residence – beautifully designed but roofless and gutted. Dick starts taking photographs and I find “treasure” in the form of broken red clay roof tiles with words and elephant logos. Next thing I know – two men come up and tell our guide they are Tamil refugees and want us to see their deplorable living conditions.

They tell us the government makes promises but only helps the Sinhalese, not the Tamils. We go to the village recording every word of a makeshift interview.

Supposedly their families went back to India as refugees during the war and came back in 2010. We are taken to open land (there are no leases given so there is no ownership and no fences). They live in put-together shacks made of stray container boxes ironically labeled “Handle with Care”, tin roofing, palm leaf walls, and bits of stray wood. Somehow they are well dressed and when we peek inside, we see a refrigerator hooked up to pirated electricity taken from someone’s legal line. I did notice nice looking outhouses and was told the government built 54 for both Tamils and Sinhalese. They tell us the government will not give them jobs or let NGO’s help either. They say their poor Sinhalese neighbors are given homes, etc.

Now, here is the rub. I notice a nice residential neighborhood and ask who lives there. They casually say Tamils, just like our poor destitute friends who have been showing us around, so I ask the obvious question, “Why can’t they help you?” They say in true Indian fashion, “They are a different caste. They can’t help us.” This is so confusing and frustrating. They are asking foreigners to help when their own people would not.

We are given a photocopy of a list of all the Tamil families living in these harsh conditions. We decide not to give them money or promise anything but do give them our contact info. All of a sudden, two soldiers (or police) come up, take us to their boss, a lieutenant and ask our names, passports and “reason” for snooping around. Dick’s sweet-talking ends up with a friendly photo-op with our new friends.

We leave perplexed by it all. What is the truth?

We spend the rest of the day visiting Hindu temples – a treasure trove of colorful reliefs of many gods that make up a belief that is so complex.

We shoot photos of hundreds of destroyed buildings, go thru checkpoints, and are turned back for reasons we don’t understand.

By the end of a very long day, photo weary but happy eating the best Tandoori chicken ever and only seeing 2 other foreigners, we decide that northern Sri Lanka is ripe for tourism being a fascinating mix of history and a culture which includes three of the world’s oldest religions living side by side.